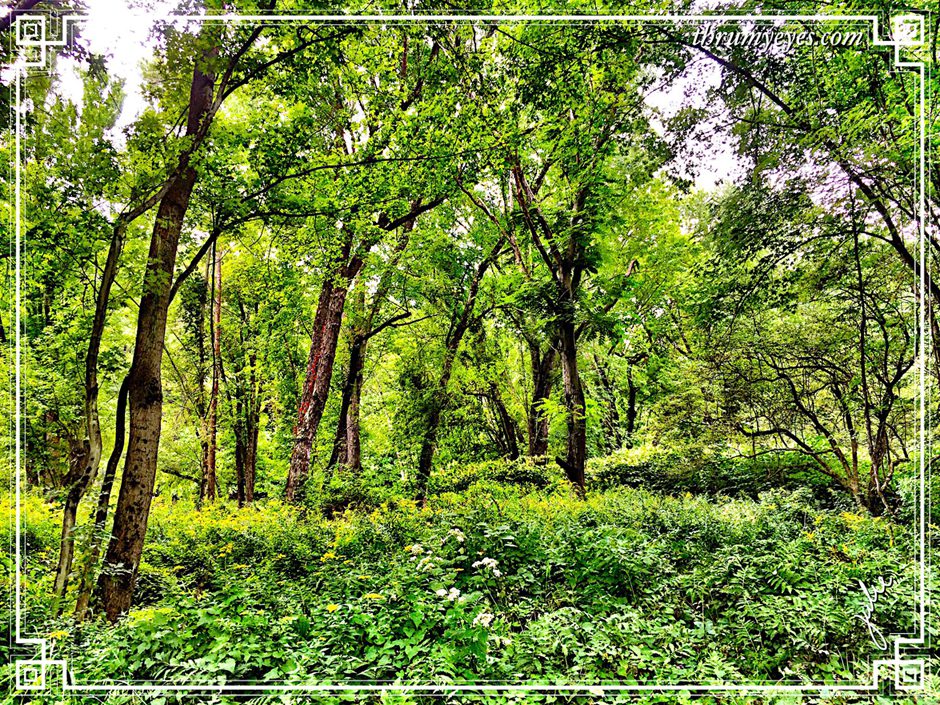 It seems that from the Mississippi River east, our country is full of forests! It is so beautiful, I LOVE it!! 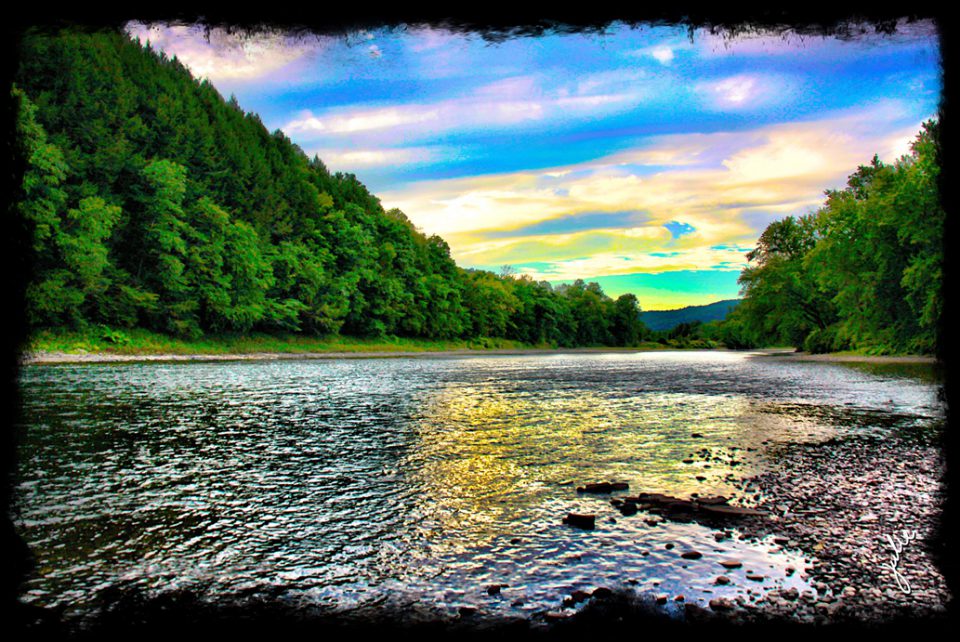 As the sun was about to set we walked out to the edge of the Susquehanna River, it was so lovely amongst the beautiful trees! 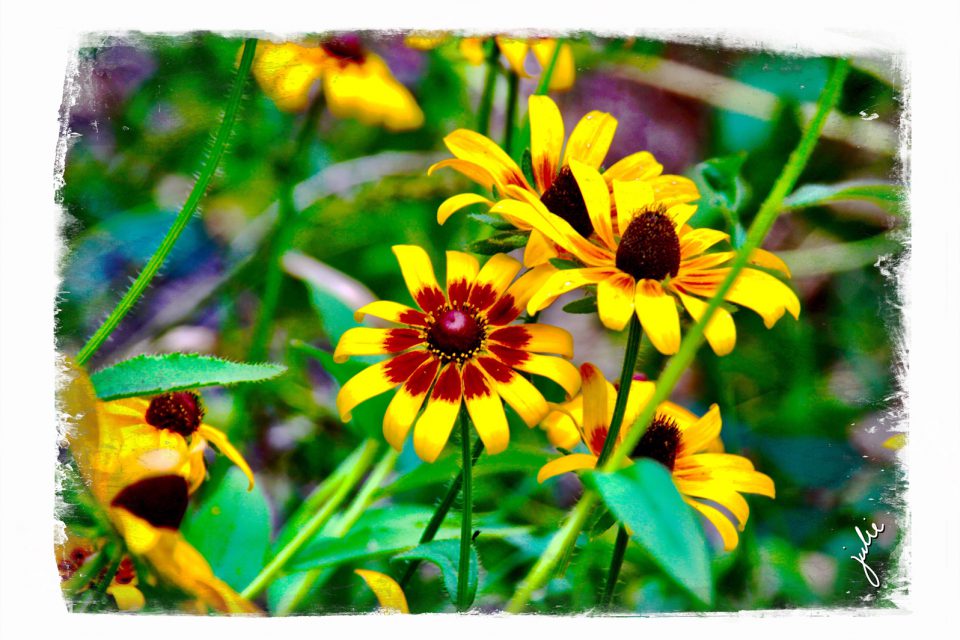 We saw beautiful wild flowers everywhere on our trip out east. Black-eyed Susan or Rudbeckia hurt are members of the Sunflower family and gorgeous! 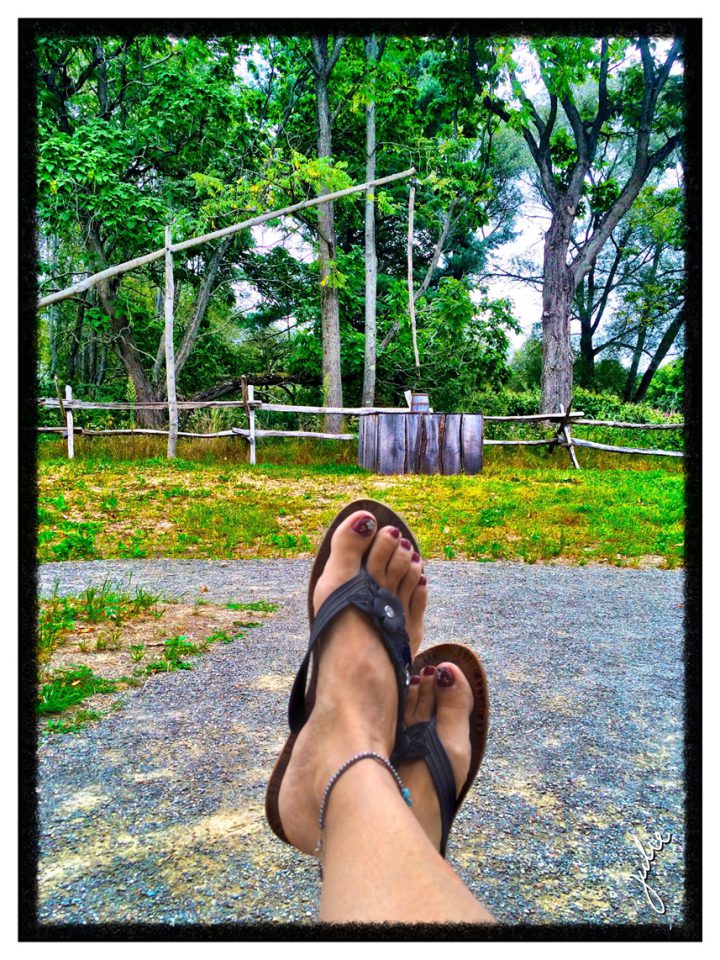 What a great place to sit and RELAX, where I think of the past and what happened on this land back in the 1800’s? 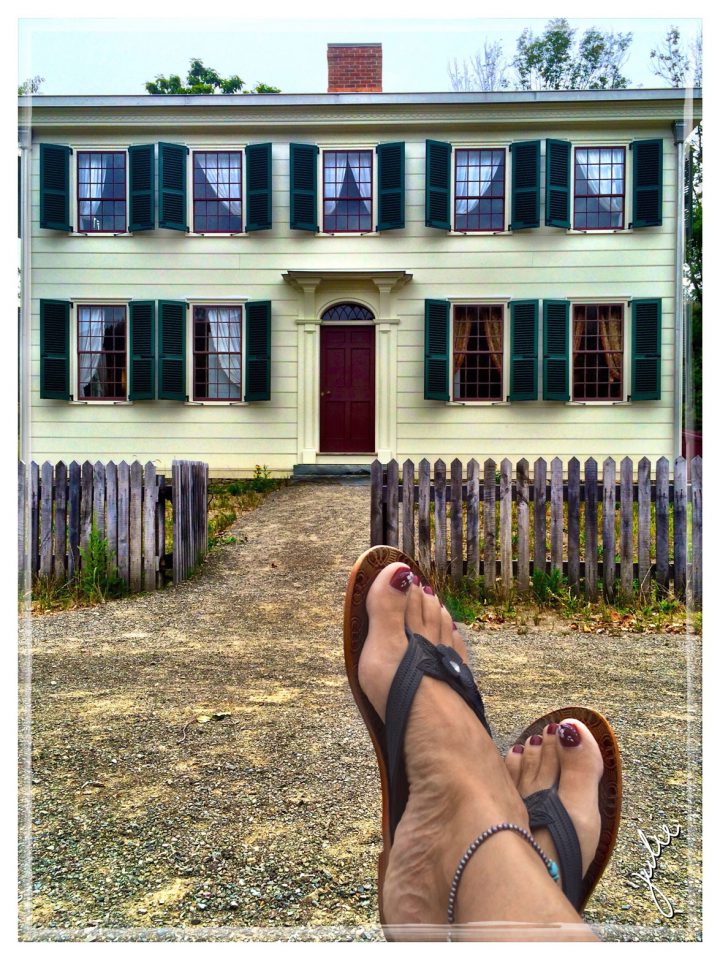 We spent a number of hours in Harmony, now Oakland, Pennsylvania where the LDS church has reconstructed the area to what it looked like in the 1800’s. This rebuilt home of Isaac & Elizabeth Hales, is where Emma lived and where Joseph Smith arrived to board and work, in 1825.  I found it the perfect place to put my feet up and RELAX! 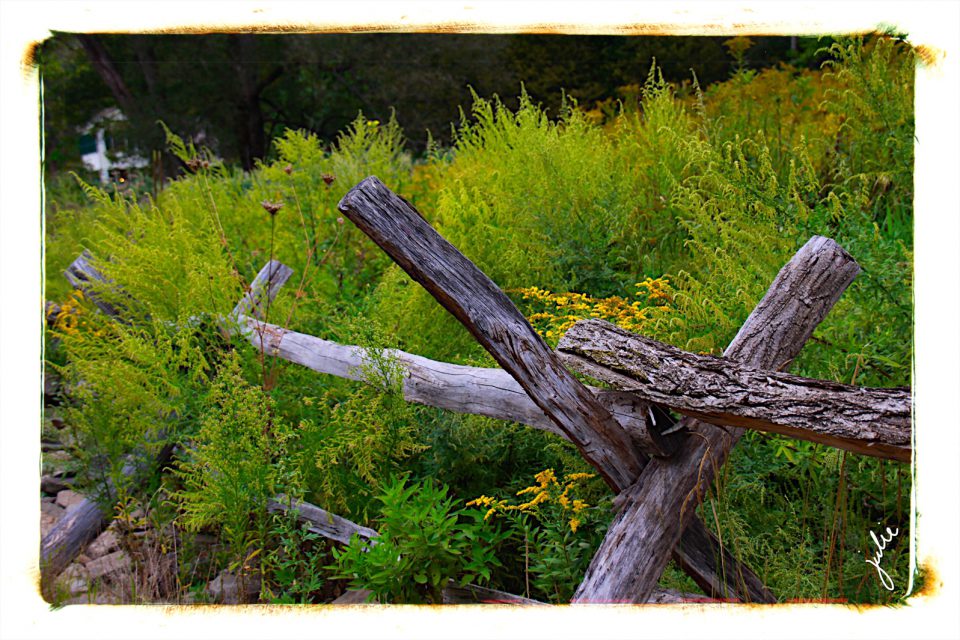 As we have been driving around the eastern part of the United States, something that stands out is the greenery, it is breath taking!  I love the contrast of color in this photo with the fence and the plants.  A fence similar to this one once surrounded the homestead of Isaac & Elizabeth Hale, which was located on this spot.

We drove to Harmony, Pennsylvania, known today as Oakland, where The Church of Jesus Christ of Latter-day Saints, has a beautiful chapel that houses a Visitor’s Center.  It is new, it wasn’t here the last time we were here.  Just before you enter the Visitor’s Center there are these two statues representing two of the great events that happened in this area, the Restoration of the Aaronic & Melchizedek Priesthood. 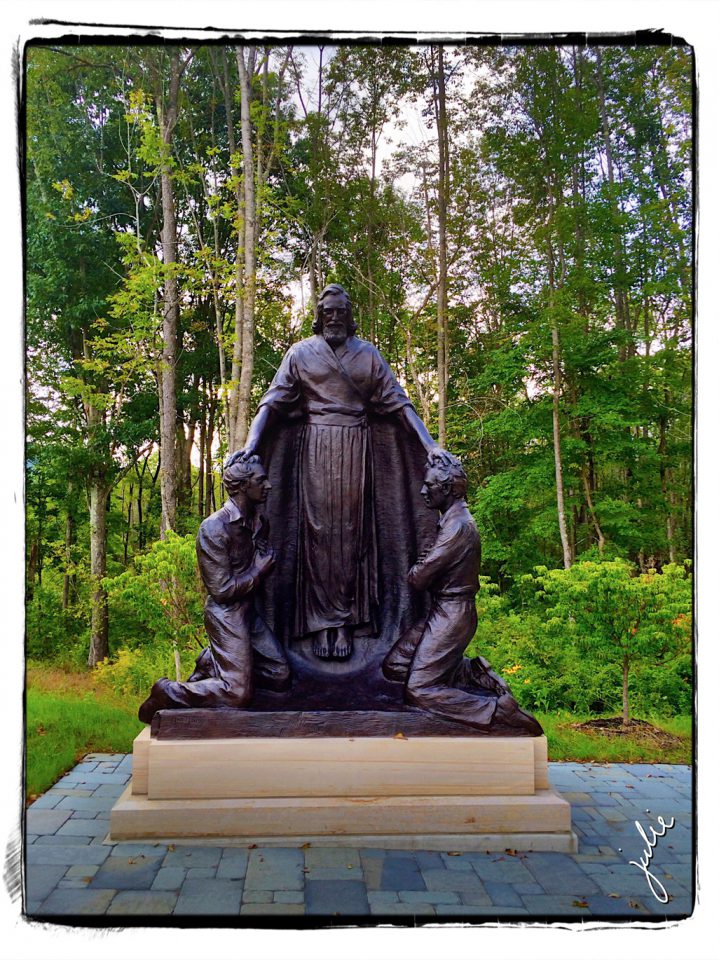 AARONIC PRIESTHOOD; On May 15, 1829, the Prophet Joseph Smith and Oliver Cowdery went into the woods not far from where the Visitor’s Center now is, to pray about the importance of baptism.  In answer to their prayer, John the Baptist appeared to them, conferring the Aaronic Priesthood on them and commanding them to baptize each other.  They went down to the Susquehanna River and there Joseph baptized Oliver and Joseph laid his hands on the head of Oliver and ordained him to the Aaronic Priesthood and then Oliver did the same to Joseph. 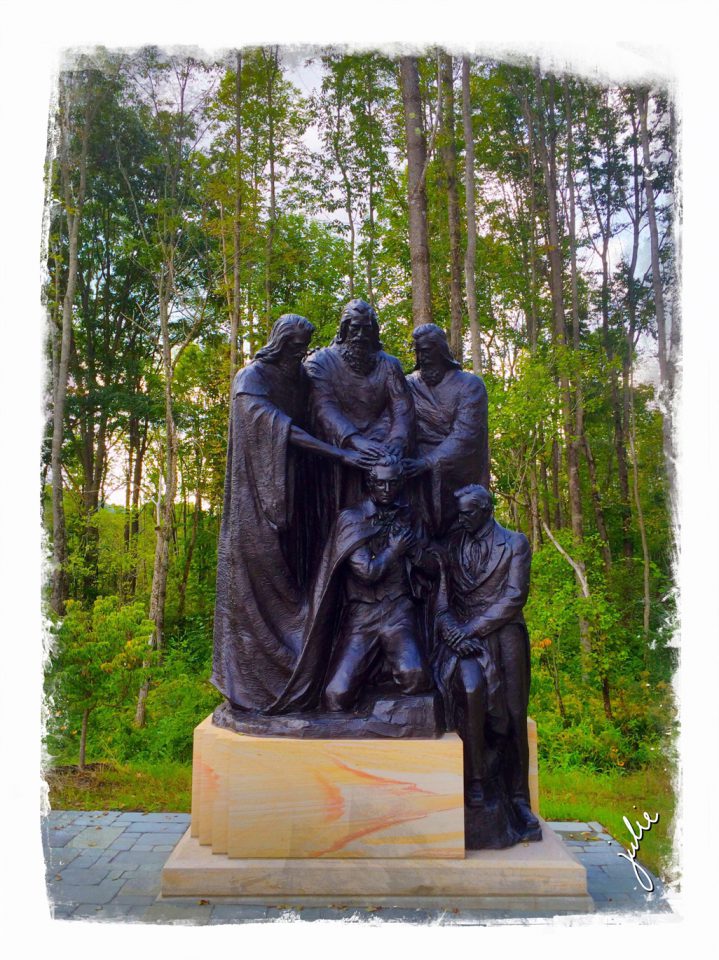 MELCHIZEDEK PRIESTHOOD; We don’t know when the Melchizedek Priesthood was restored, but it was shortly after the restoration of the Aaronic Priesthood. 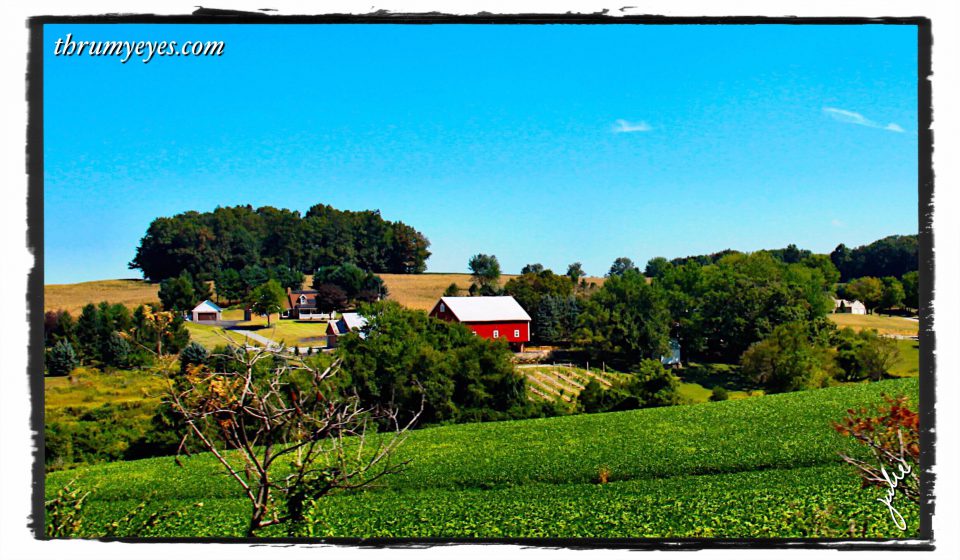 We had a wonderful drive up through Maryland, Pennsylvania & then New York.  We passed a lot of beautiful farmlands. 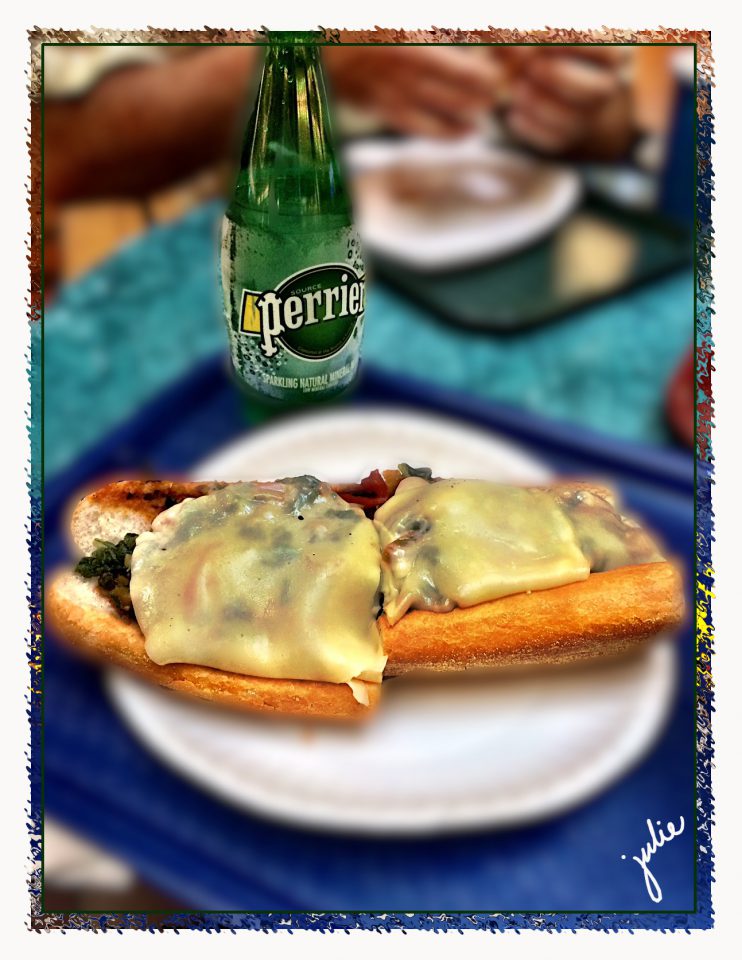 A cheesesteak sandwich is made from thinly sliced pieces of steak and melted cheese in a long roll. The cheesesteak is one of the favorite foods of Philadelphia. It can be found in most parts of the United States and is called a “Philadelphia” or “Philly Cheesesteak”. Now, when you are a vegetarian or vegan, this sandwich doesn’t work…however, I was delighted to find veggie cheesesteak sandwiches around Philadelphia and they were delicious!  On this one they added mushrooms to the spinach, onions, green peppers & marinara sauce.  The other day I had one with portobello mushrooms on it.  Just take off the cheese and it’s vegan, yummy! 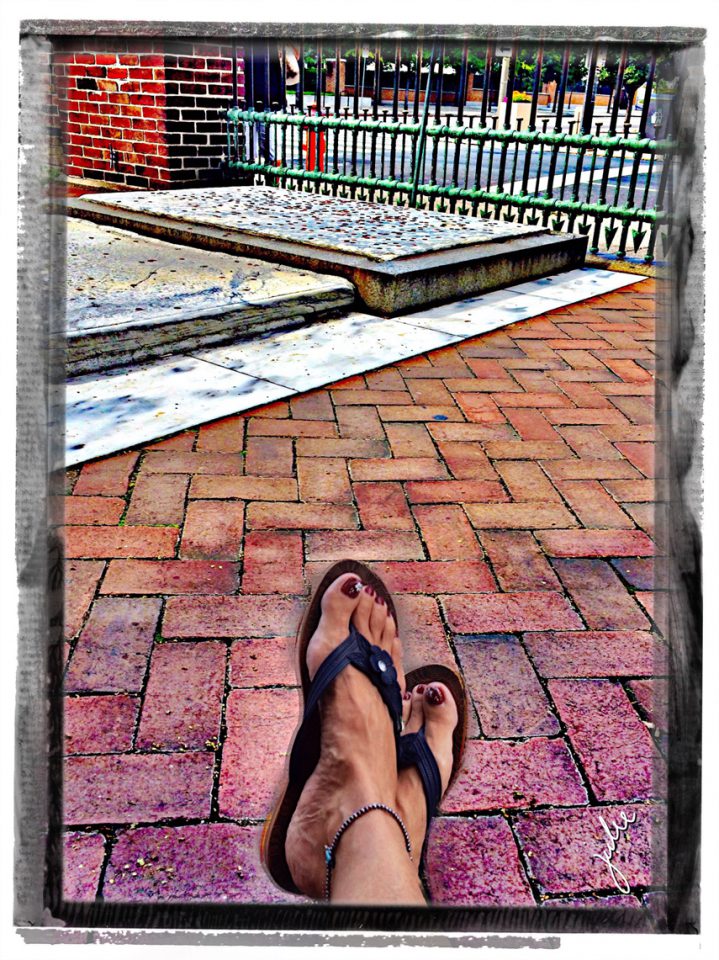 Across the top of Benjamin Franklin’s tomb people drop penny’s for good luck and in remembrance of his sage advice; ‘A PENNY SAVED IS A PENNY EARNED’. His tomb is very simple, just as he requested, with his wife buried next to him. Near by on a wall are some words that the young Benjamin Franklin wrote, never intending them to be used;

The Body of B. Franklin, Printer, ~ Like the Cover of an old Book, ~ Its contents torn out,  ~ And stript of its Lettering & Guilding, ~ Lies here, Food for Worms. ~ But the Work shall not be lost, ~ For it will, as he believed ~ appear once more ~ In a new & more perfect Edition ~ Corrected and improved ~ By the Author. 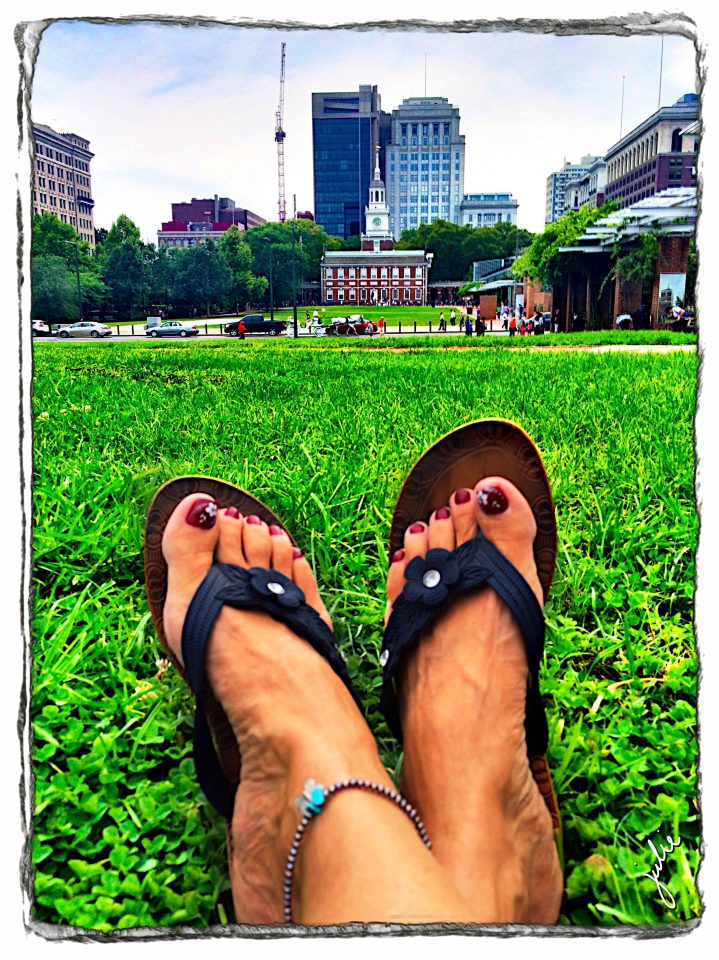 One of the nice things about Philadelphia is that all or most of the historical things are within walking distance, so after a great walk & seeing some really cool places, it was time for a sit, so I put my feet out and RELAXED!  As I did this I thought of freedom and my gratitude to all those who went before and gave so much!!  In 1776 Benjamin Franklin said, when referring to being unanimous in signing The Declaration of Independence, ‘we must hang together, or we will be pretty sure to hang separately.’ 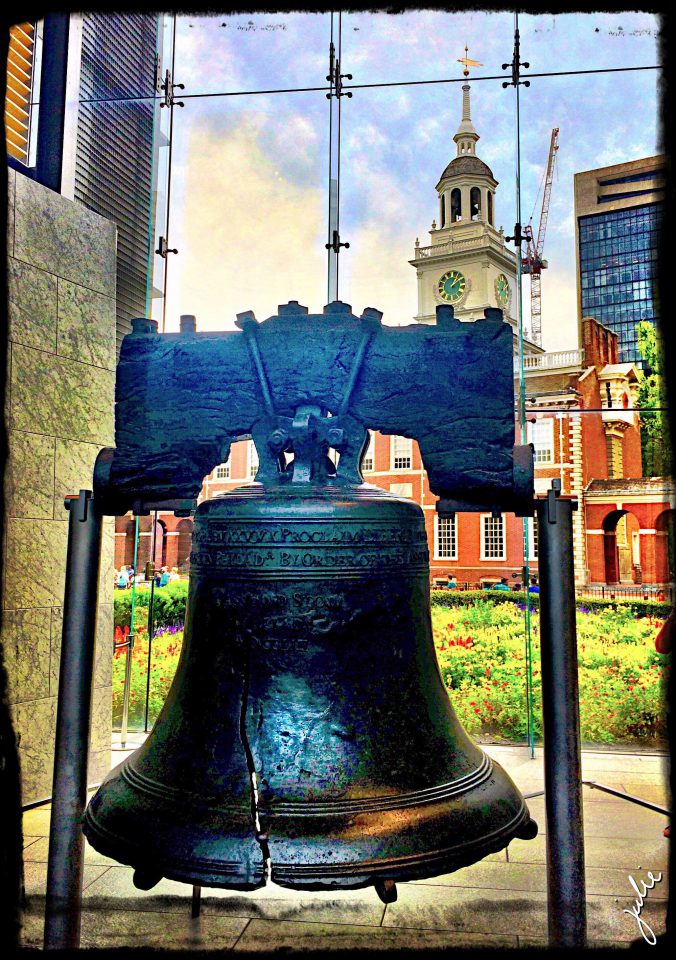 I always enjoy going to the Liberty Bell when we are in Philadelphia, is symbolizes America’s Independence.  It was made in 1752 and was originally placed in the steeple of what we now know as Independence Hall which you can see in the background, and was cast with the lettering “Proclaim LIBERTY throughout all the land unto all the inhabitants thereof”.  It first  cracked when rung after its arrival in Philadelphia and the crack grew over the years.  In the 1830s, the bell was adopted as a symbol by abolitionists, who called it the “Liberty Bell.” 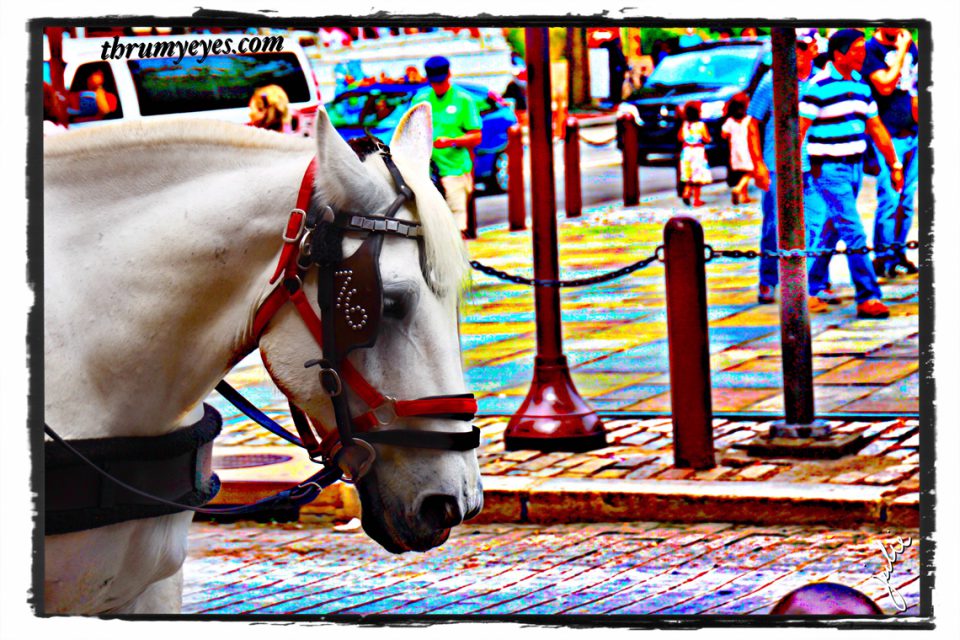 Even the horses remind us of where we are, REMEMBERING 1776, a year that changed the world! 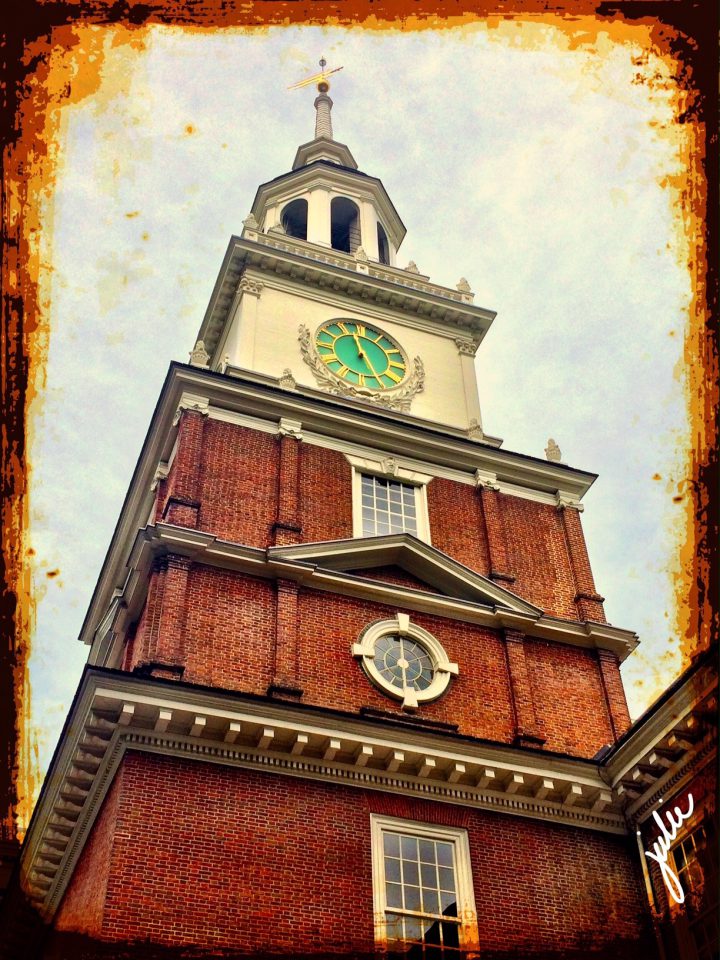 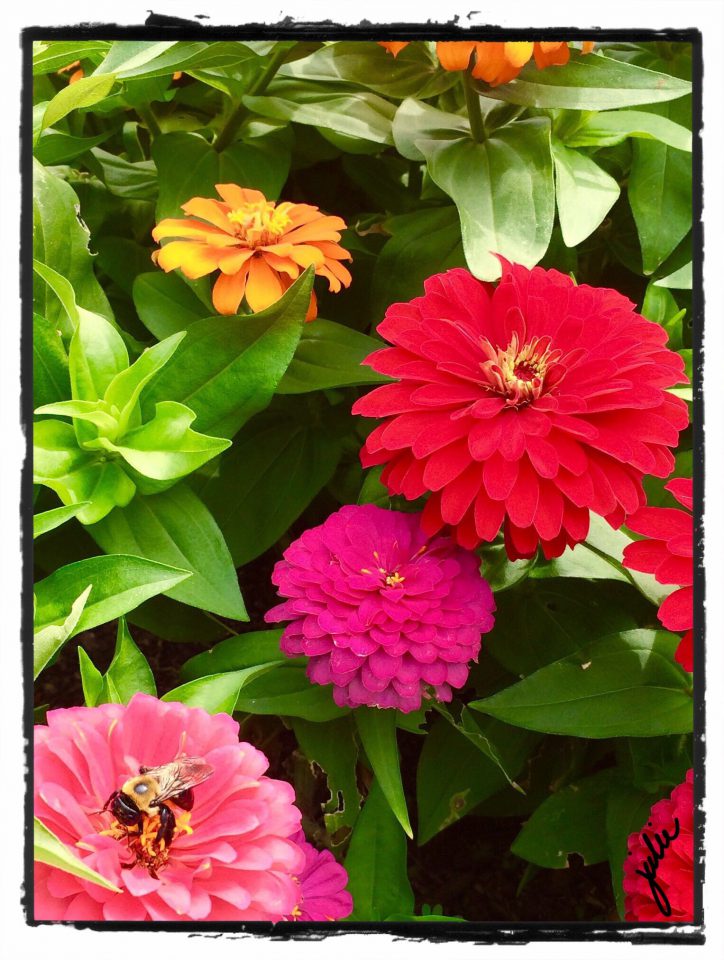 While visiting the Benjamin Franklin Museum, we went outside where they have a structure that shows where Benjamin’s house once stood. There in the area that would have been the courtyard are some beautiful flowers. As I was taking photos of them, a Bumble Bee came by and enjoyed the different and very colorful flowers. 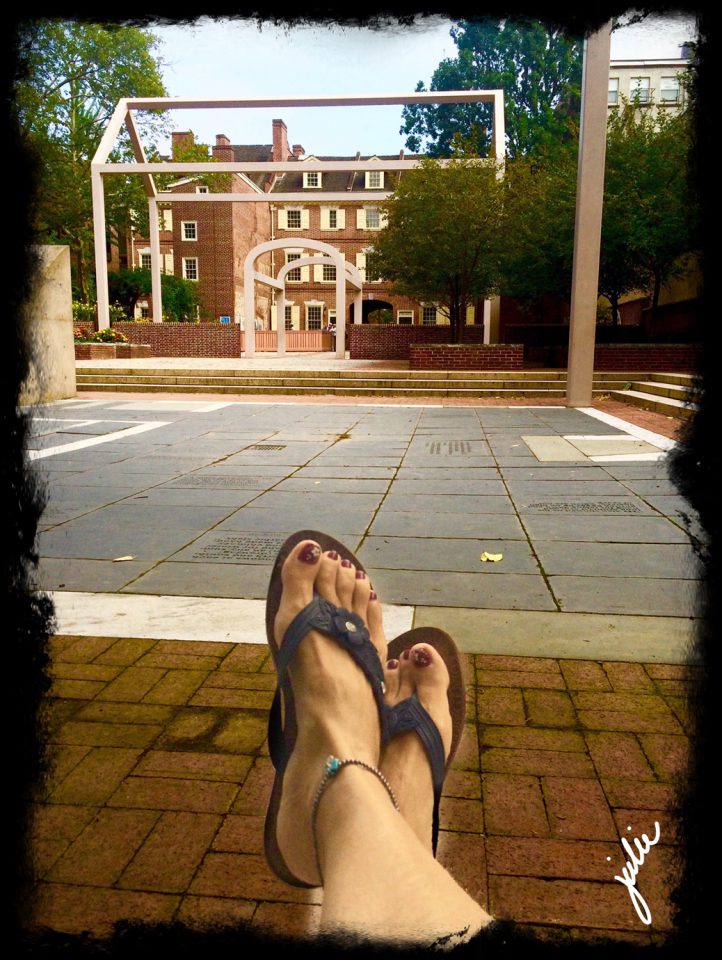 These structures were put up to help us see where Benjamin Franklin’s house once stood as well as his printing shop.  Below where I am sitting is the Benjamin Franklin Museum.
I had to sit and RELAX for a while, to take it all in, as I realized what a giant of a man he was! 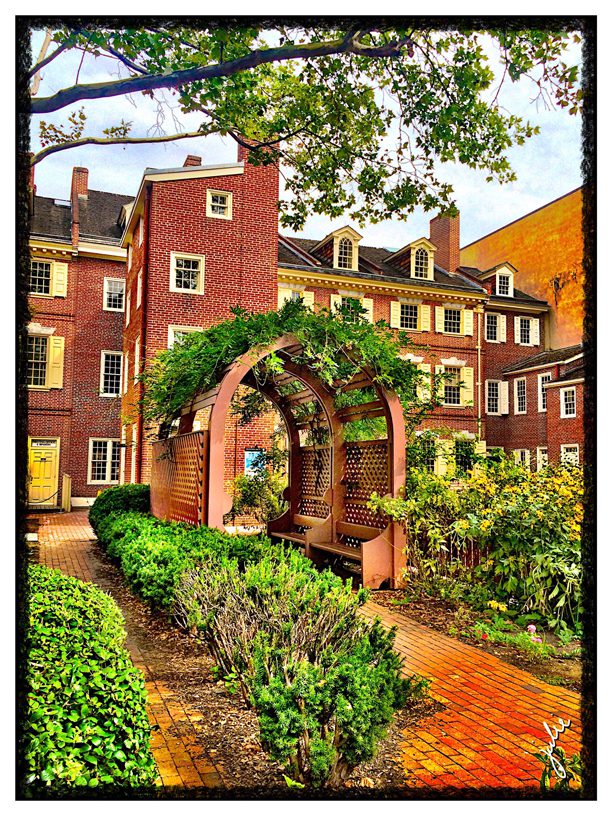 Today there is the Benjamin Franklin Museum where once stood his house.
Some of the buildings surrounding where his house once stood are still there,
so it gives us an idea of what his neighborhood was like. 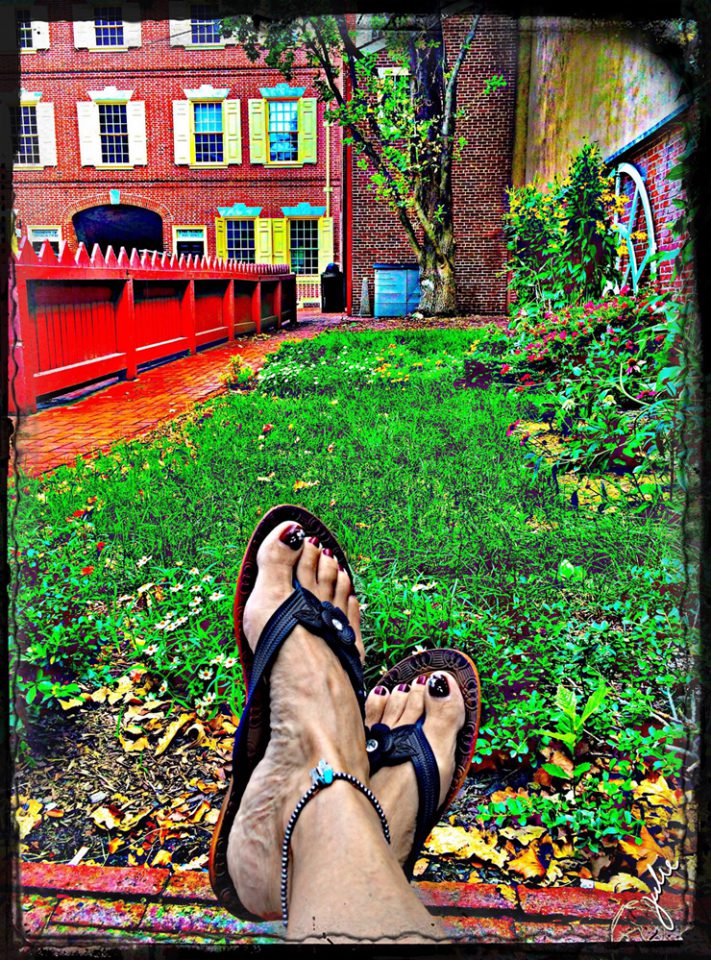 I found the prefect place to put my feet up and RELAX in the neighborhood where Benjamin Franklin once lived.  I asked my son; if Benjamin Franklin was alive today would he be a printer, an inventor, a developer, a statesman, a politician, what would he be?  It’s a good question, because he was all of the above in the 1700’s and more. 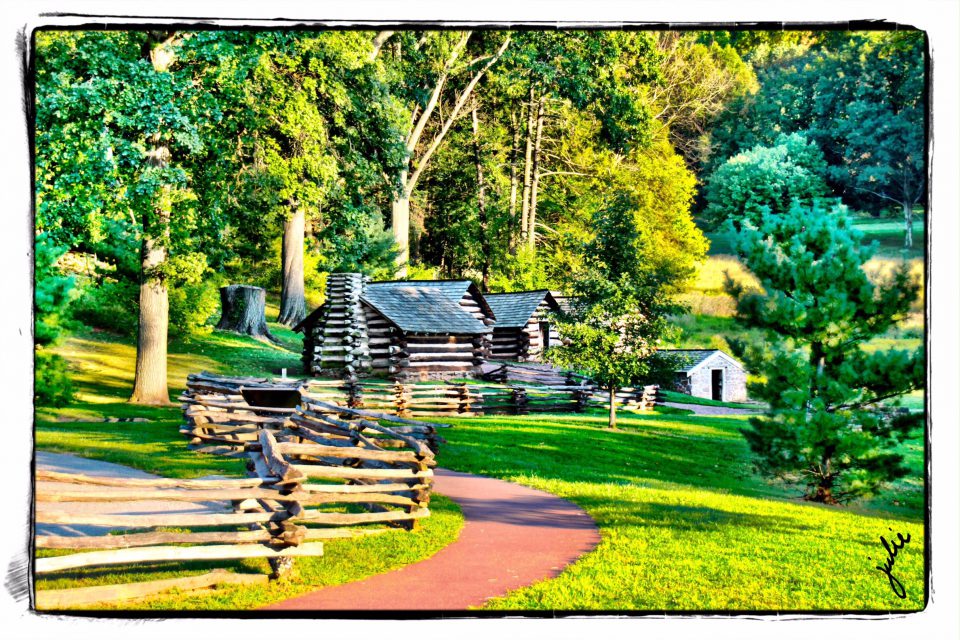 From December 19, 1777 – June 18, 1778, General George Washington and his troops stayed at Valley Forge, which today, is a large national park preserved for our enjoyment.  Reconstructed structures such as theses cabins and other buildings as well as statues remind us of that devastation winter that created the soldiers General George Washington needed to defeat the British. 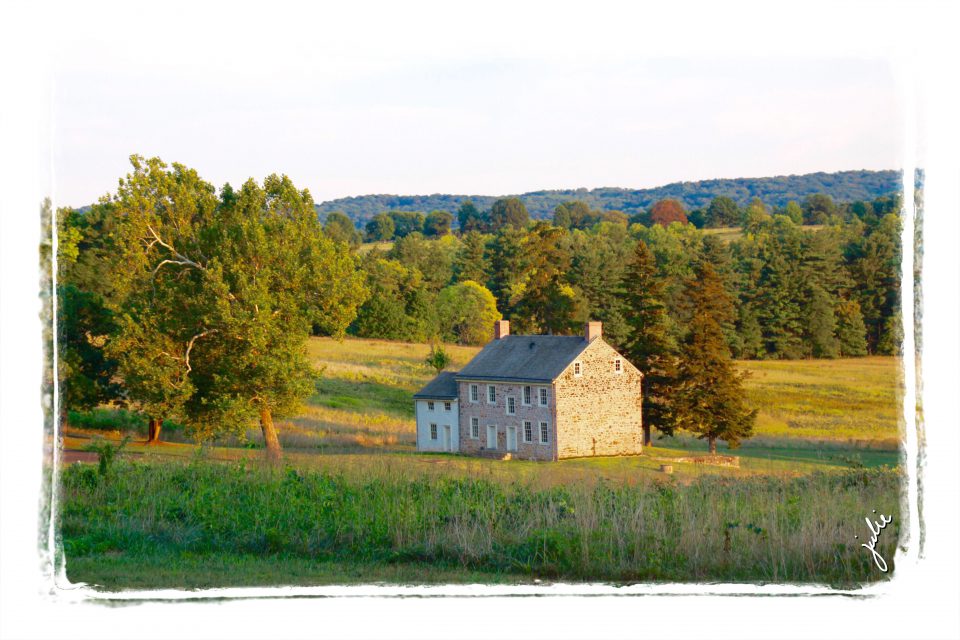 Valley Forge National Historical Park encompasses 3,500 acres and is beautifully preserved with restored historic structures, reconstructed log cabins, farm homes, and monuments erected by the states from which the Continental Soldiers came.  There is a great driving tour thru this nationally protected area!