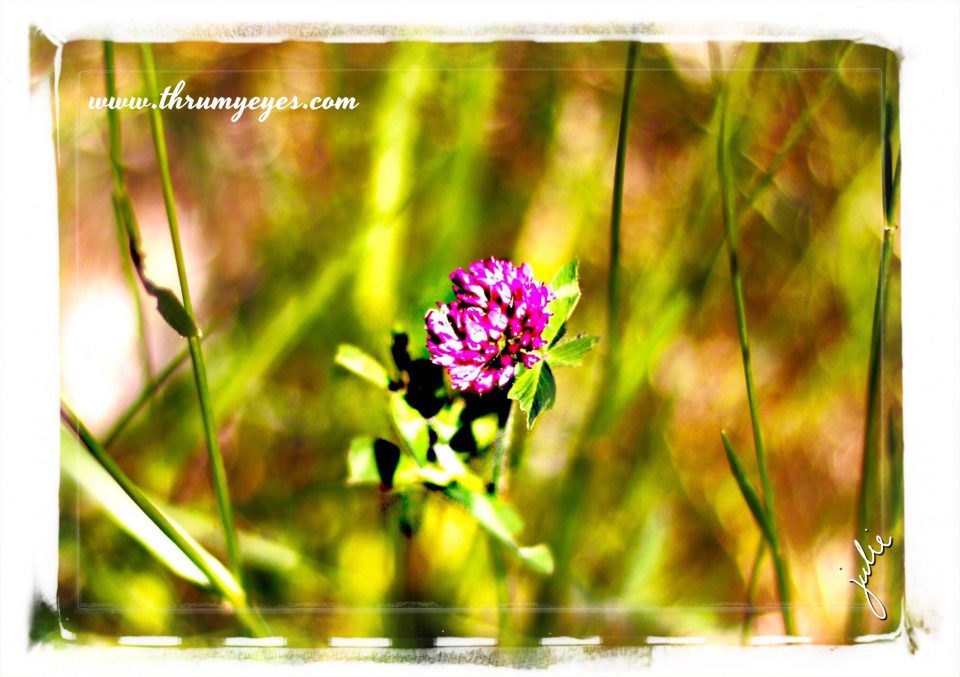 I love little purple flowers that pop up in amongst the weeds, gorgeous! 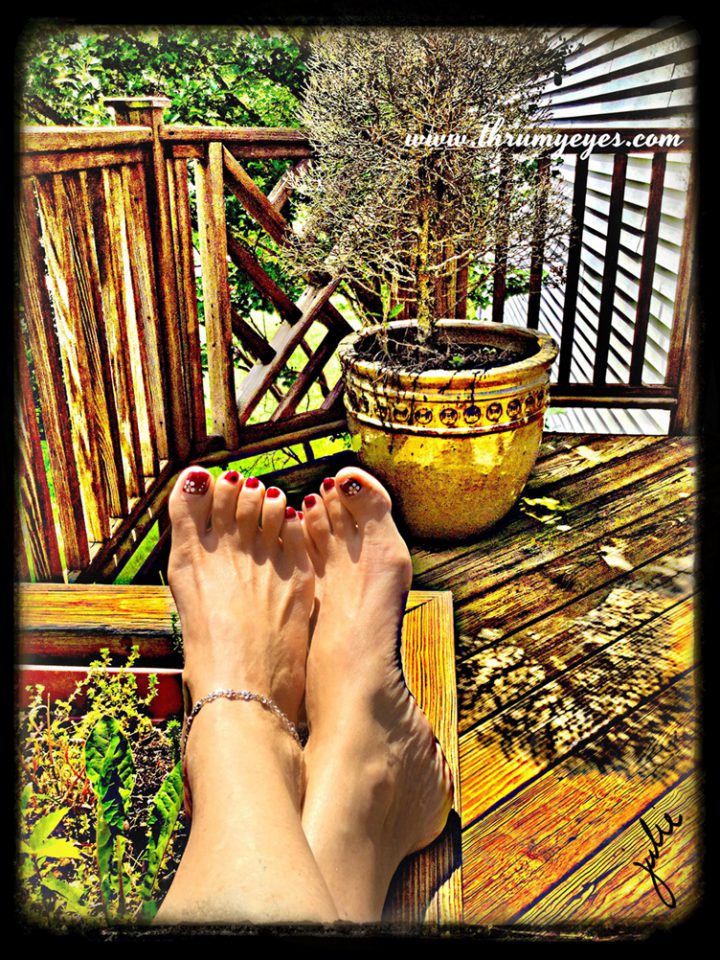 It felt so good to put my feet up and RELAX!  We all have to do this from time to time, put our feet up and ENJOY LIFE!

Photo taken with an iPhone 5s. 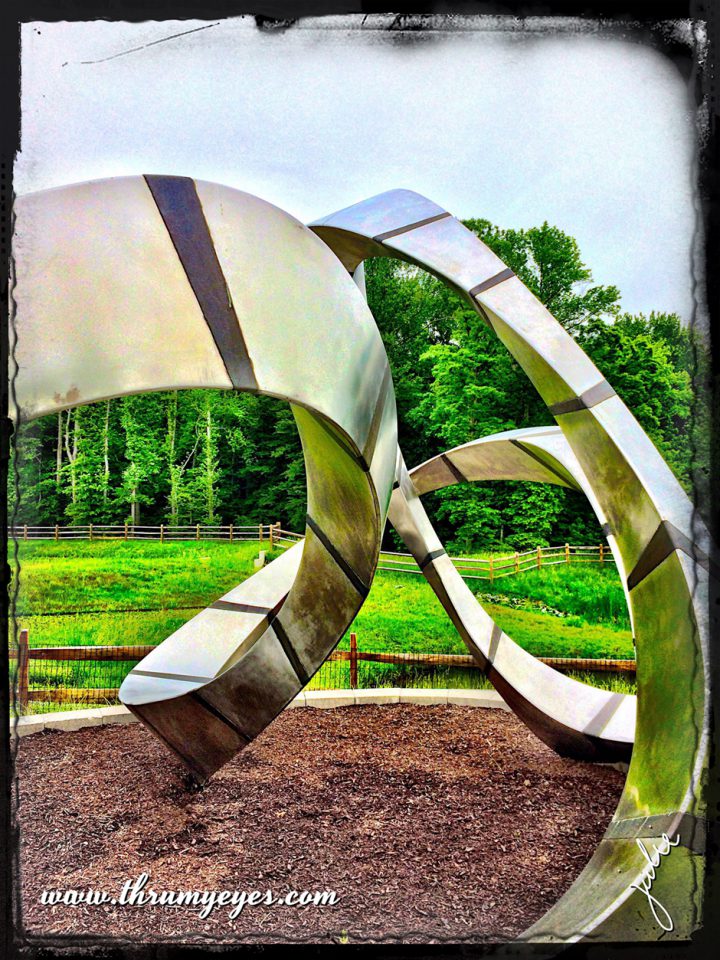 This sculpture is called INTERPLACE by Michael Szabo (2012). I walked by it each morning when I was out walking and it intrigued me.  This is another view of it. 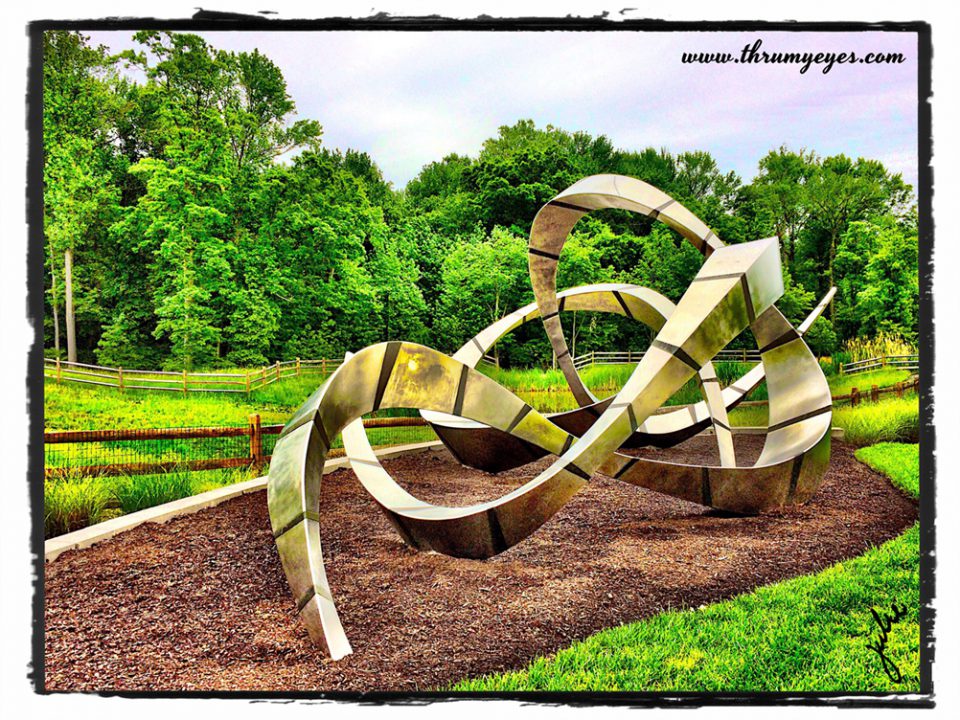 I went walking each morning we were in Maryland, and of course, I had my camera across my shoulder as well as my iPhone in my hand.  I found this sculpture very interesting and took some photos of it.  It is called INTERPLACE by Michael Szabo (2012).  As I was walking back to our hotel I was stopped by a policeman and he asked me if I had been taking photos.  I told him I had and talked about the cool birds and sculpture I had seen.  He asked me if I had taken any photos of the buildings.  NOPE, HA! HA!  NSA was right across the street from our hotel.  I guess I looked like a spy!

Taken with an iPhone 5s. 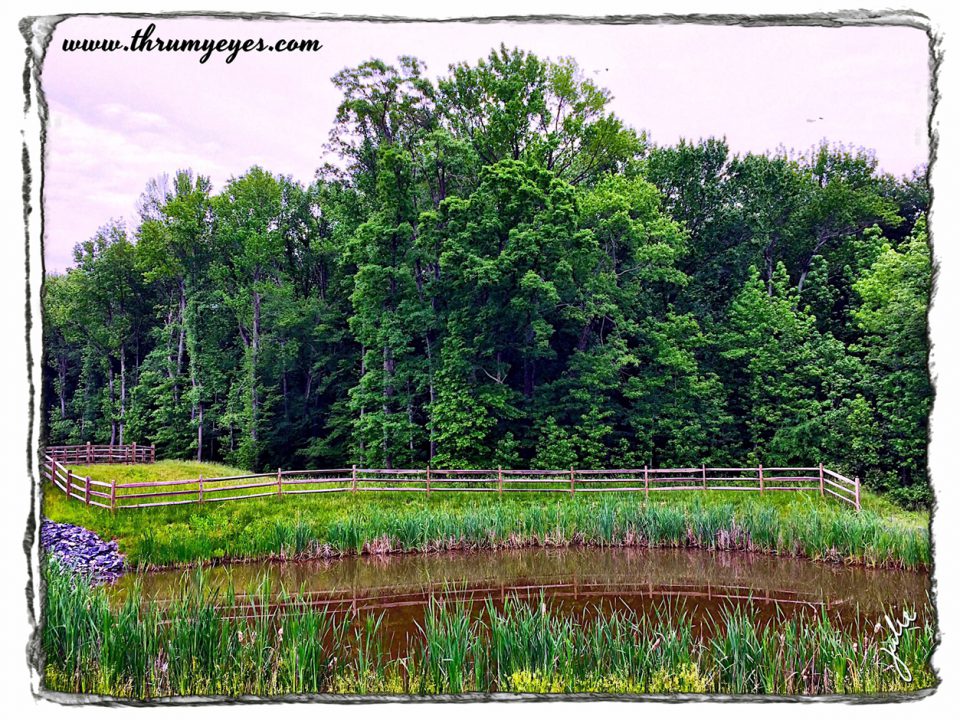 On a recent trip to Maryland, I went for a walk each morning and I loved it as I walked thru a forest of trees.  Coming from a desert, this lush green really touched me! 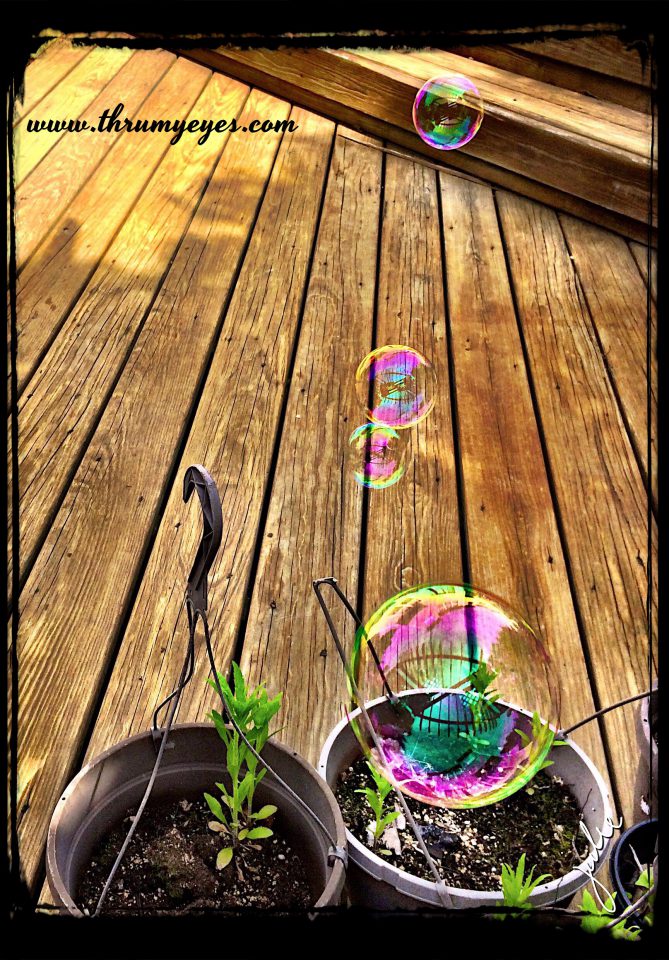 I LOVE bubbles and I think everyone does, particularly children! Do you love bubbles? 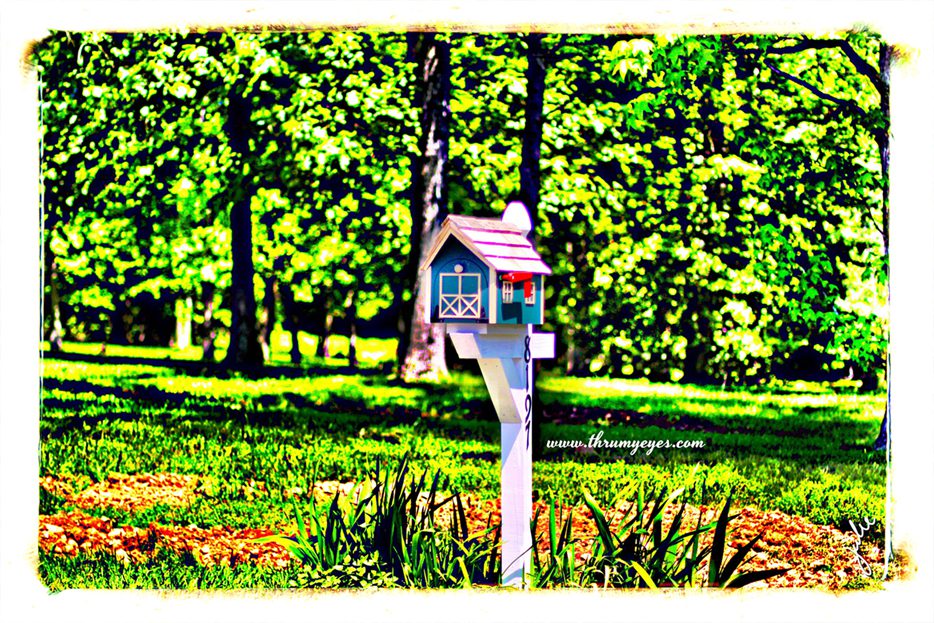 I find mailboxes fun to look at, there are so many unique & different kinds. This one, a little house, is so cute! As you can see from the background, Maryland is covered with forest! 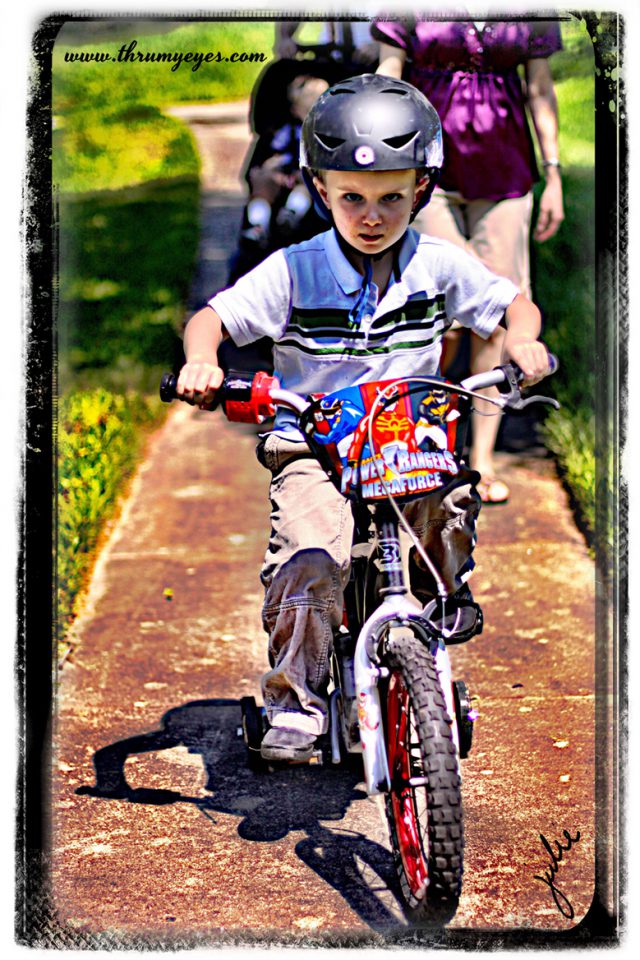 I LOVE taking photos of BIKES and it is even more fun when my grandson is riding it! 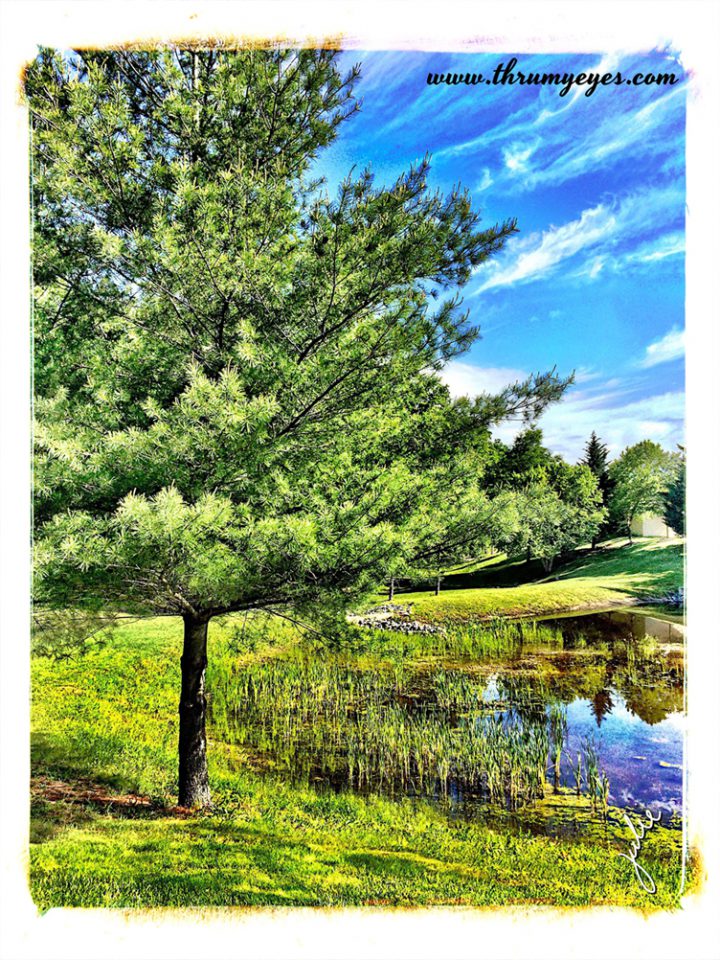 Maryland is a pretty state, very green with lots of forestry areas.  We had a wonderful time visiting our son and his family there. 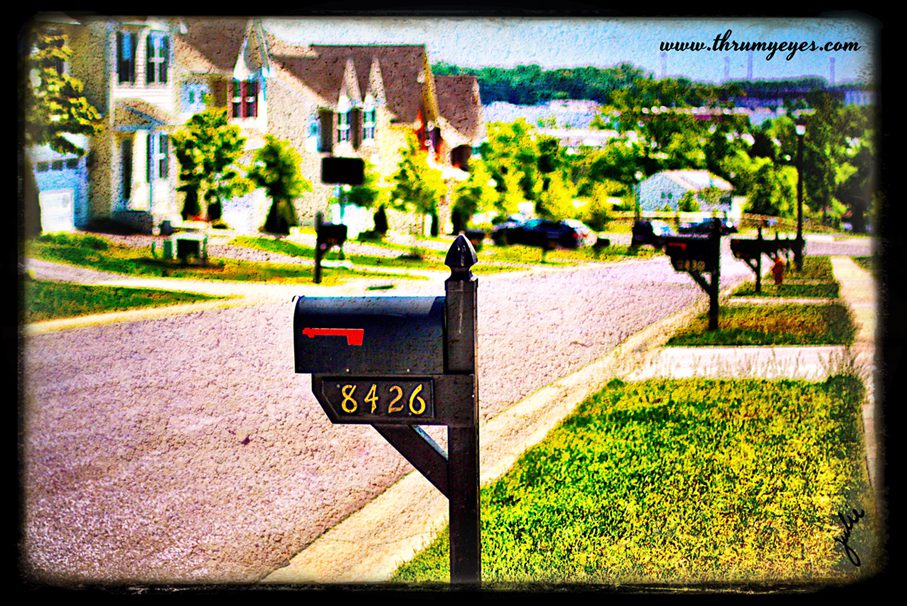 We went for a great walked and I loved this line of mailboxes along the street! 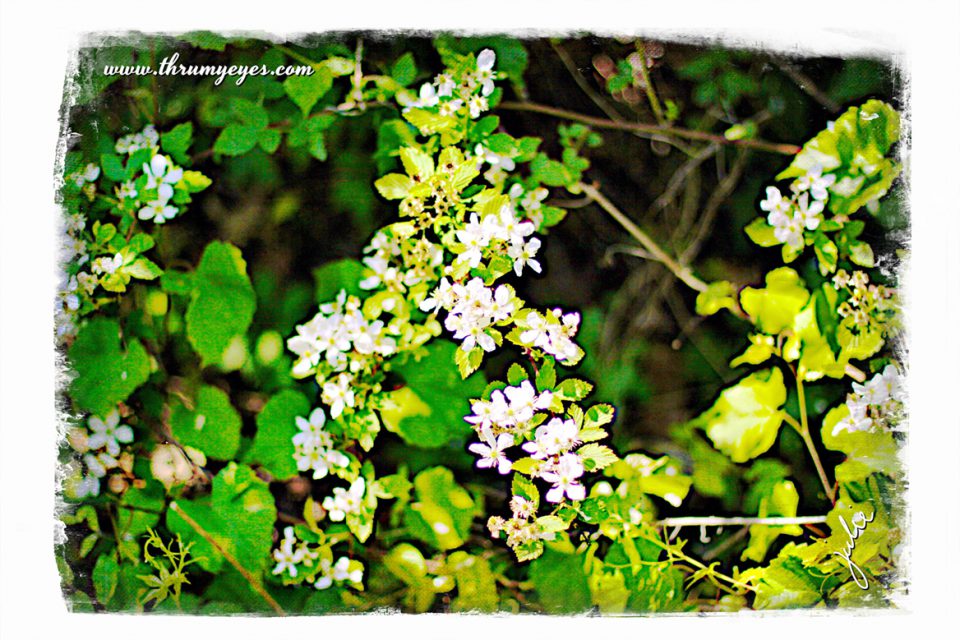 I love walking along the way and taking photos of the beautiful flowers I see! This day was no exception! 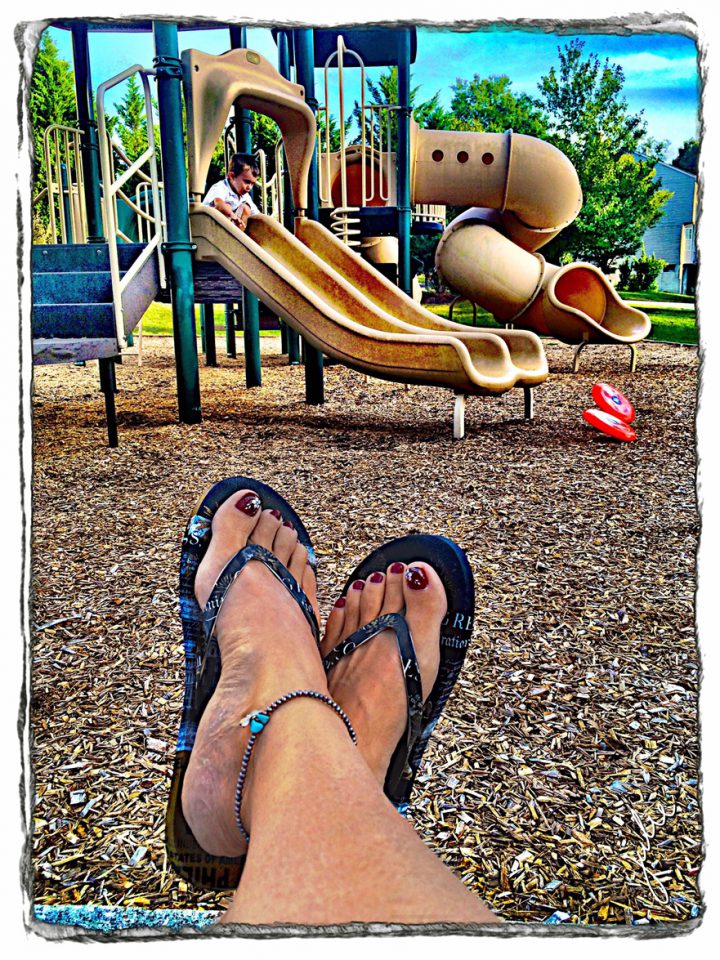 My grandson had fun at the park, not just going down the slide, but sending the frisbees down, what a great place for me to RELAX and put my feet up! 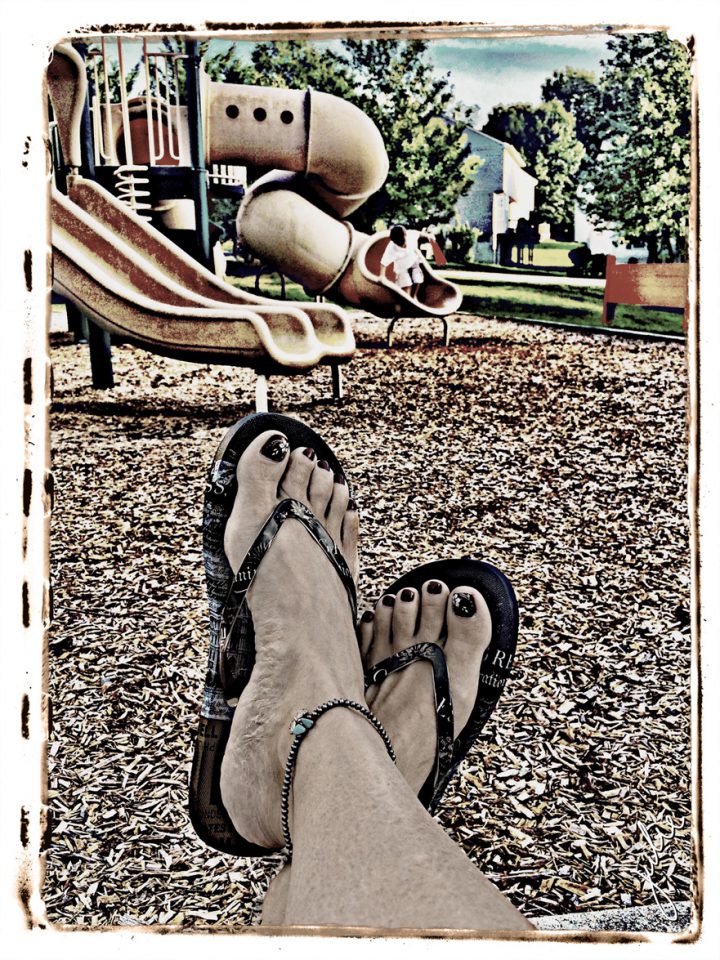 What a perfect place to put my feet up and RELAX while my grandson plays at the park! 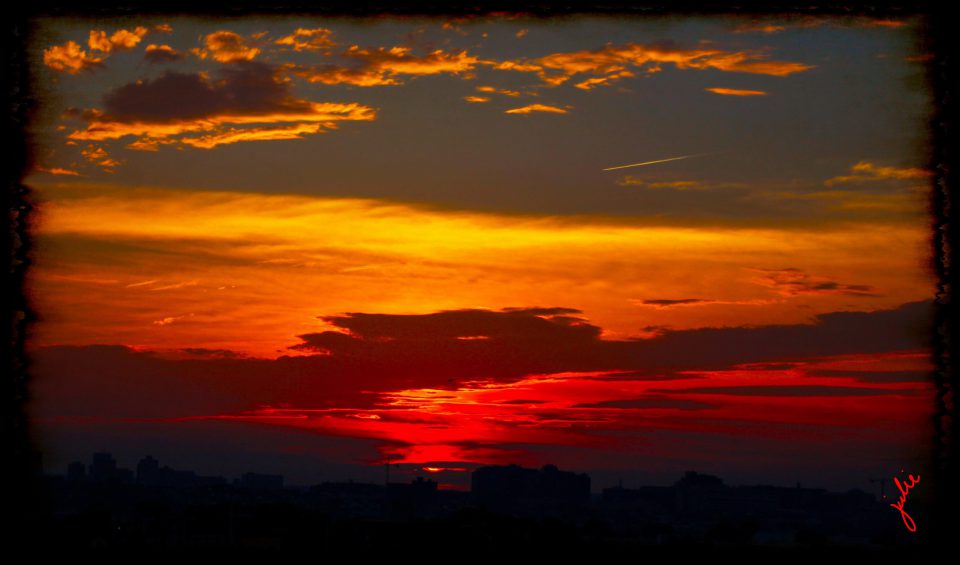 As we drove from Middle River, Maryland to Annapolis, Maryland, there was a beautiful sunset over Baltimore, I couldn’t resist taking it’s picture! 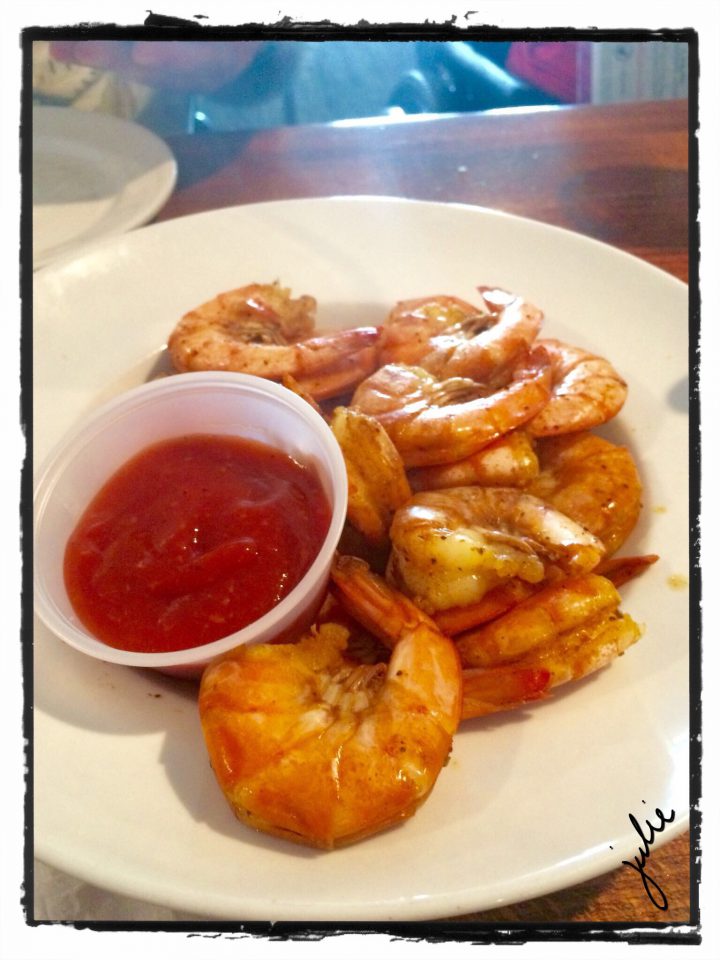 We met some friends, from years ago, Bruce & Kathy and their daughter Sheri and we went to a fun restaurant, Carson’s Creekside Restaurant & Lounge, it was delicious!  For appetizers we had their Succulent Steamed Shrimp and… 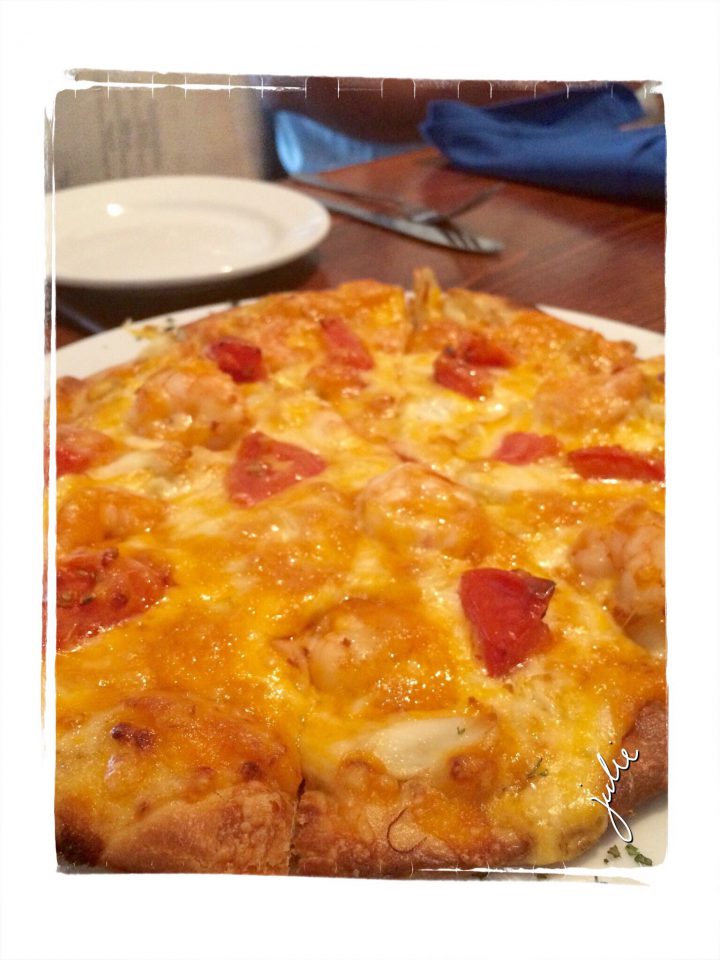 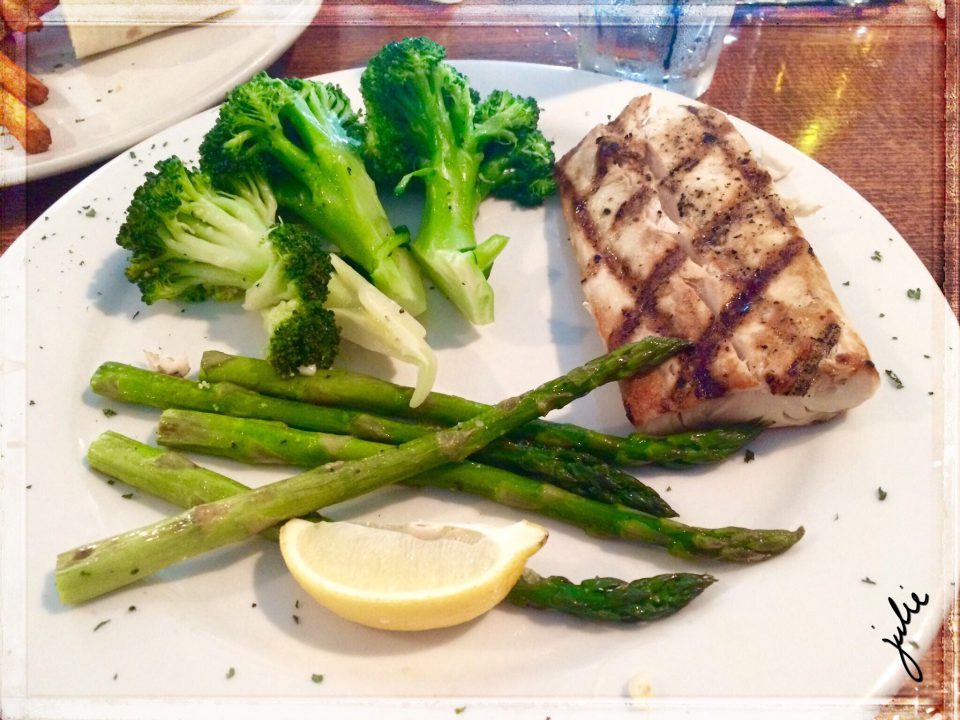 For my entree I had Mahi-Mahi with broccoli & asparagus yummy, too!

I highly recommend Carson’s Creekside if you are in Middle River or the Baltimore area!! 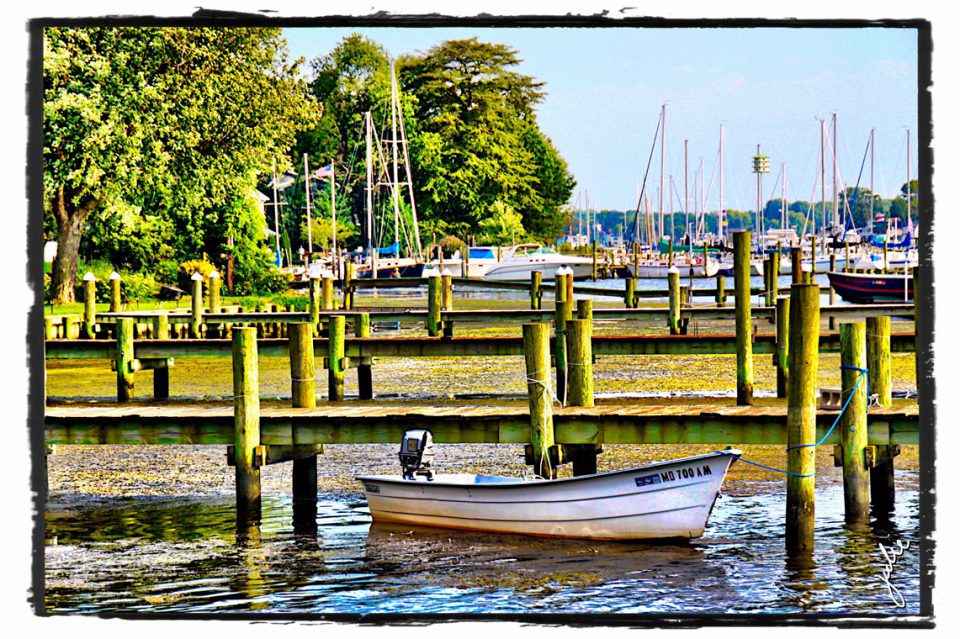 We went to dinner with some friends who we have known for over 35 years, it was so good to see them!  Our dinner at Caron’s Creekside Restaurant was delicious and it was so fun to be together with them.  Before we ate I went out on the dock and took photos of Hard Head Creek, the boats and and the beautiful scenery! 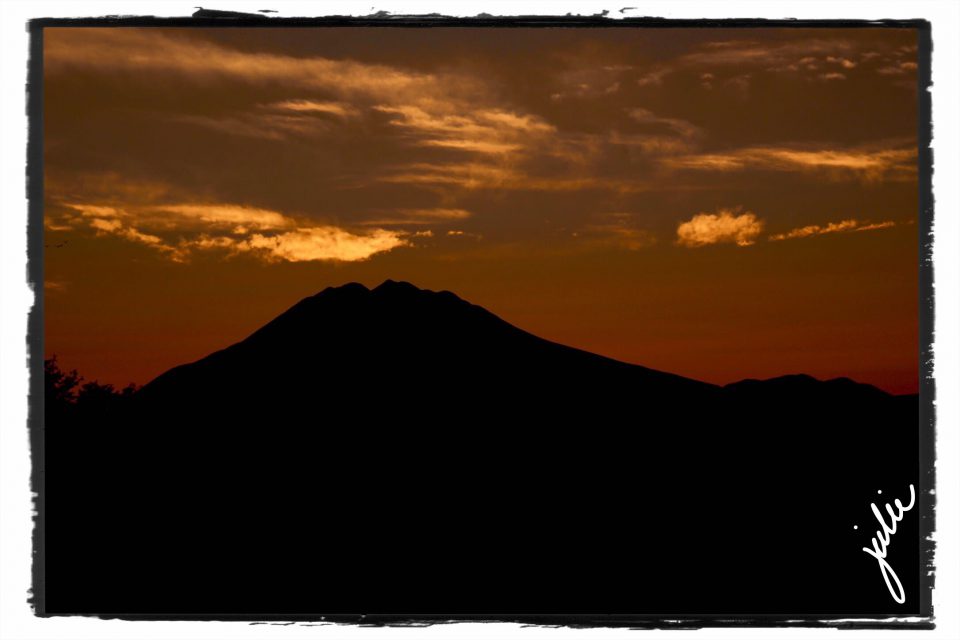 We were driving along the freeway as the sun was setting over Baltimore.  I grabbed my camera and took this photo with the setting sun behind a mountain, or is it?  I showed it to our son, Benjamin and he knew right away what it was, because he knows there are no mountains in Baltimore.  What is it?  Well, it is a type of mountain, a mountain of salt ready for the winter. 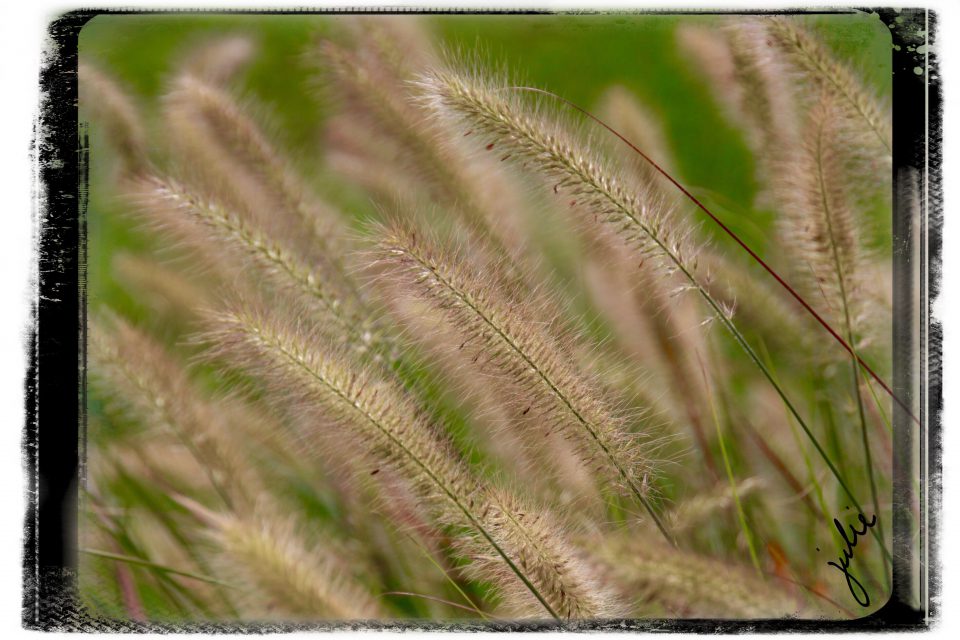 As we were leaving Fort McHenry we passed these beautiful plants that were waving in the wind, I am not sure what they are, if you know, please let me know!!  GRAZIE! 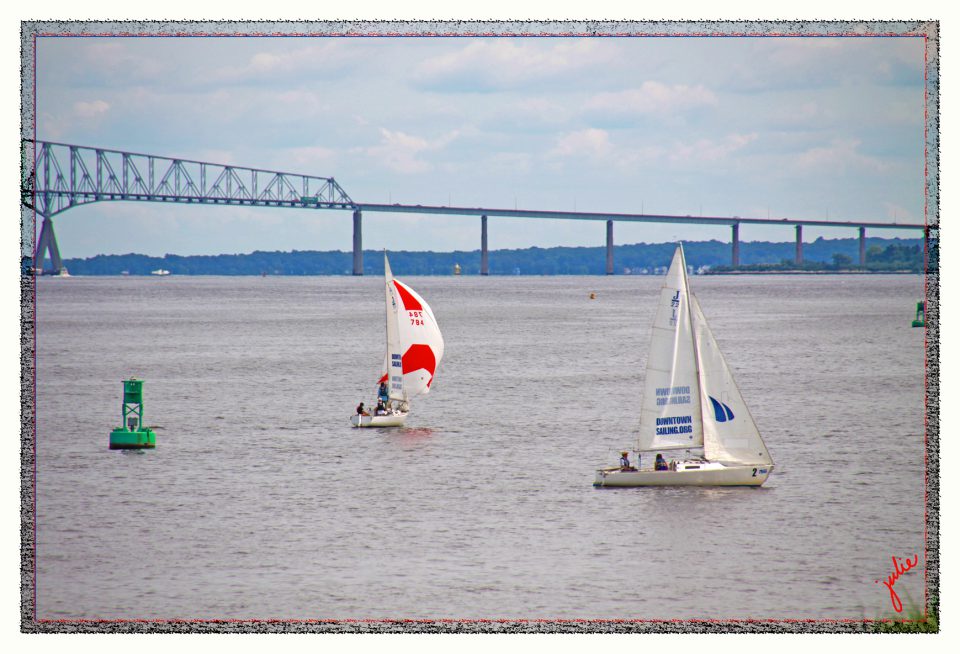 It was a beautiful day as we walked along the water’s edge and watched the sailboats sailing on Chesapeake Bay with the The Francis Scott Key Bridge, also known as the Outer Harbor Bridge or simply the Key Bridge, in the background. 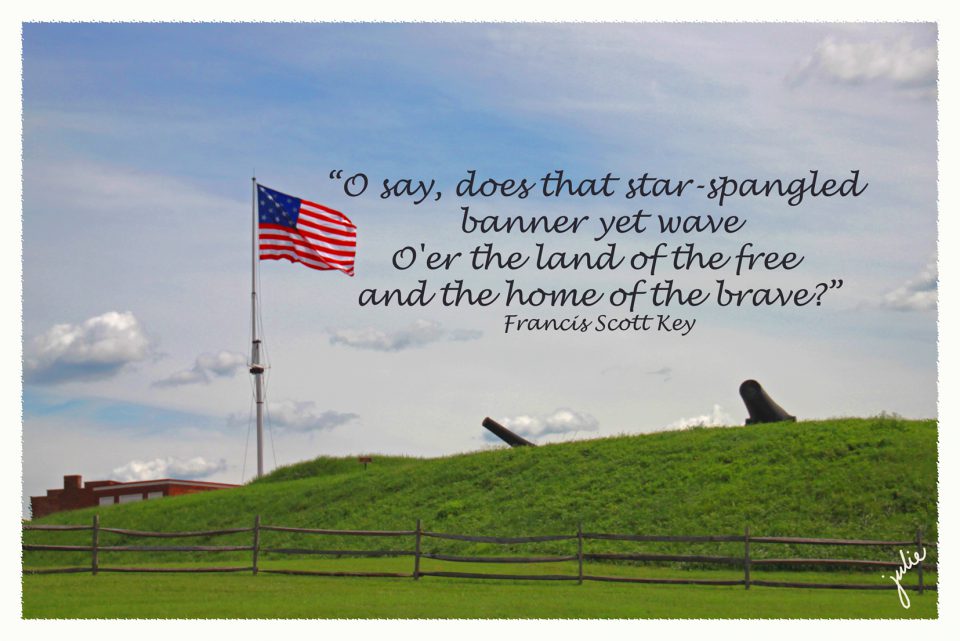 On the morning of September 14, 1814 our flag was still flying over Fort McHenry in Baltimore, Maryland, after a bloody night of shelling from the British. Francis Scott Key, a lawyer, spent the night on Chesapeake Bay and was delighted when he saw our flag flying in the morning light. From that experience he penned the words to our National Anthem and what later was named The Star-Spangled Banner. We had the privilege of going thru Fort McHenry where we thought of those who fought & died for us and of those who watched as our flag still flew, THANK YOU!

O say, can you see, by the dawn’s early light,
What so proudly we hail’d at the twilight’s last gleaming?
Whose broad stripes and bright stars, thro’ the perilous fight,
O’er the ramparts we watch’d, were so gallantly streaming?
And the rockets’ red glare, the bombs bursting in air,
Gave proof thro’ the night that our flag was still there.
O say, does that star-spangled banner yet wave
O’er the land of the free and the home of the brave?

On the shore dimly seen thro’ the mists of the deep,
Where the foe’s haughty host in dread silence reposes,
What is that which the breeze, o’er the towering steep,
As it fitfully blows, half conceals, half discloses?
Now it catches the gleam of the morning’s first beam,
In full glory reflected, now shines on the stream:
‘Tis the star-spangled banner: O, long may it wave
O’er the land of the free and the home of the brave!

And where is that band who so vauntingly swore
That the havoc of war and the battle’s confusion,
A home and a country should leave us no more?
Their blood has wash’d out their foul footsteps’ pollution.
No refuge could save the hireling and slave
From the terror of flight or the gloom of the grave:
And the star-spangled banner in triumph doth wave
O’er the land of the free and the home of the brave.

O thus be it ever when free-men shall stand
Between their lov’d home and the war’s desolation;
Blest with vict’ry and peace, may the heav’n-rescued land
Praise the Pow’r that hath made and preserv’d us a nation!
Then conquer we must, when our cause it is just,
And this be our motto: “In God is our trust!”
And the star-spangled banner in triumph shall wave
O’er the land of the free and the home of the brave!